book binding: signatures and making the case (the once and future king)

Woefully un-updated, a few pics and notes on the book I’m binding for a prop for some future work.

Previous to this – undocumented, because I’m forgetful – I sewed the signatures together (the bundles of folded paper that make up the body of a book), and ‘aged’ them by soaking the whole sewn unit in a vat of tea. It was a bit of a gamble – a few pages tore in the drying process, which took the bulk of a week – but it eventually dried and came together nicely when I glued the spine. Here’s a few pics of the signature block:

The effect was fairly good, enough of an aged appearance without looking overly stained. It’s a bit rippled but nothing that can’t be worked with – I guess the real test will be once some handwriting goes inside. We shall see!

I was unable to photograph the process of making the case, the glue was drying way too fast, but hopefully the pics will show some evidence of the process. That being said – I wouldn’t be redundant in over-explaining anyway, as it’s easier to link the fantastic video I use as a guide to this process: 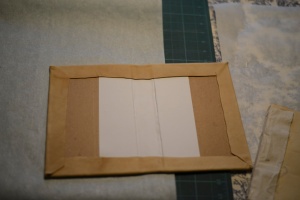 I used a soft hide leather for the case fabric, really the wrong material, too thick, but improvisation is definitely a factor here and it had the texture I was interested in. Proper davey boards for the cover boards, and some simple paper to help line the spine. Neutral ph glue, although I’ve heard wallpaper paste works well.

The corners are a tad messy but it’s meant to have the appearance of being hand made, and a little sloppy at that.

The case dries with the signature block inside as a bit of a guide, and that’s where it’s at now. A few pics to show the almost-finished product: 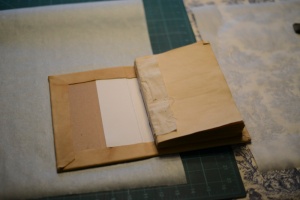 After it dries, I’ll put on the end-papers and mount the block in the case. And then it’s down to ‘decorating’

This is the first post I’ve made from my ipad. I’m curious to see how much of a disaster it is.

Edit: horrible. Just horrible. Didn’t include most of the images, all of them uploaded tiny, bits of code mixed in with the text. Manually fixing it on my computer was equally bad. When did WP go downhill this way? ugh.