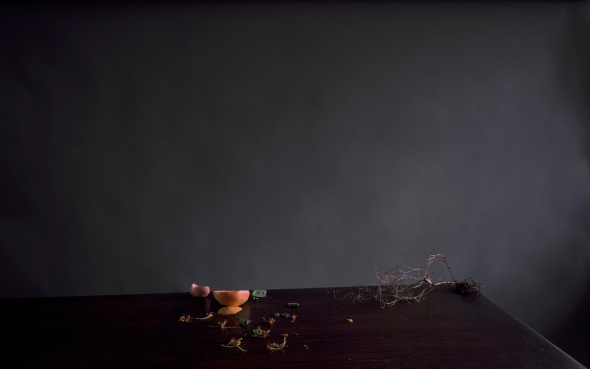 This past weekend I had the good fortune of seeing Laura Letinsky’s still-life retrospective at the Rodman Hall Art Centre in St. Catherines, it was a great show and a lovely venue I honestly barely knew existed (I’m a bad artist).

I always credit Laura Letinsky for re-invigorating my interest in still-life, her largely white-on-white “found” compositions of human activity incorporated a narrative element I wouldn’t have expected from a studio-composed still-life. Most of Letinsky’s compositions are “found” somewhere in “real life”, and then used as a resource of sorts to recreate and refine the composition in-studio. This to me, at least, is what really sets her work apart – her work is not simply documentation of something found, but the recreationg – the retelling – of a story, careful crafted, in the context of the studio (to be blunt, bitter and a tad egotistical: millions of people take photos of broken and rotting crap they find every day; to recreate, control, script, manipulate, narrate and re-narrate that rotting crap into a complete story is a much more challenging and worthy endeavour).

The work above stood out for me – if you google Letinsky you’ll see mostly her white-on-white compositions, but this exhibition had a couple of her digressions into black-on-black, which I thought were quite wonderful (though it would appear she has abandoned this trajectory). Most of the works were in the 40″x50″ range, and the chromagenic prints were beautiful.

Letinsky’s newer works, however, executed digitally and printed on inkjet, could use some serious work. It breaks my heart when I see established, well-known photographers jumping to digital and producing significantly poorer work, whether it be due to a lack of education or worse, bad technique on the part of their printer. What pains me the most is that not only is it a slight against the artist, but within the often snobbish photography community, it diminishes the reputation of digital across the board.

(In short: put an exhibition of large-format view-camera chromagenic prints alongside poorly executed digital prints of the same size, and digital looks terrible. Do the reverse – terribly processed and printed large-format film prints alongside pristine, perfectly executed digital … and well I’m sure someone would make a bullshit argument about the “nostalgia” of film or some crap … but chances are the digitals would look amazing by comparison).

Despite (presumably) the curaetor’s plackards about Letinsky’s interest in “spatial and perceptual puzzles”, the fact of the matter remains that these newer works, while certainly an ambitious dive into digital format and inkjet print, lack a great deal of technical refinement, especially in comparison to Letinsky’s earlier film-based practice. A mixture of fairly poor image compositing, especially with respect to lighting, a mixing of resolutions (rendering, essentially, the “film grain” at different sizes and levels of crispness across the image, to use a film analogy), and a general lack of dynamic range (likely from poor processing technique or over-processing), really kind of kick these works in the teeth, and yes, I’m being pretty nit-picky there.

Beyond all that however is a very simple fact: the works were simply not shot or composited with sufficient resolution for their print size. The pixels are visible and blurry, lines and edges are indistinct, and the detail falls apart even standing a meter away from the work. Somewhere along the line of production for these works some bad advice, a low-megapixel camera (for prints this size, at least), or some very bad film-scanning really failed to bring the same level of detailed robustness at this print-size in comparison with Letinsky’s other works.

I would never argue a case for her to jump back to film, but I certainly hope these newer works are stepping-stones to something more technically sound.

REGARDLESS  – this is an amazing show you should definitely try to see if you’re in the area. Letinsky’s work represents a rare and very unique milestone for still-life in general, and certainly a tremendous boon for photography at large.