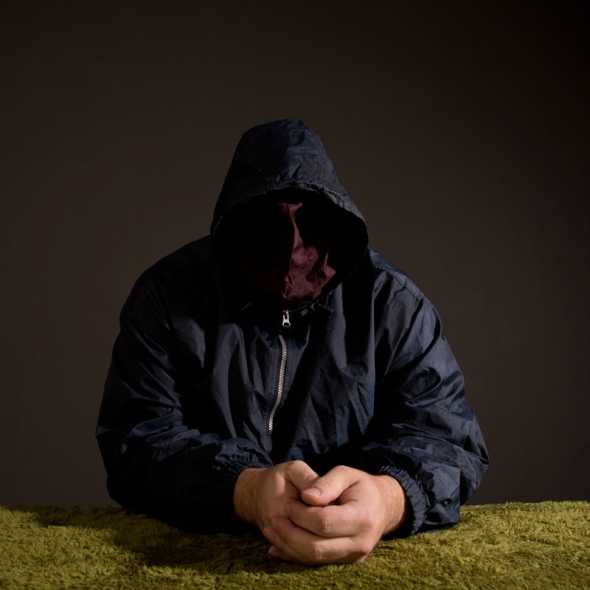 I’m honoured to announce the opening of an exhibition of Charles Latham’s recent photographic work, for which I was curator, at Landmark Arts in Lubbock, TX, as part of “Serial Experiments in Artist-Curated Micro Exhibitions“, organized by my friend and colleague Jason Derouin. Below is the curatorial statement for the exhibition:

A friend once admitted to owning a mass collection of footage of marching bands on VHS tapes. Charles Latham would seem to collect nylon sportswear and restraining devices.

The reverence with which both collections were displayed, a particular order, a neatness, a location of purpose and inscrutable significance, suggests at rituals defined by two intentions; here the objects are held aloft, revered, enshrined, displayed with pride and admiration. They are also there placed to control, to contain and symbolically restrain something that, for the collector, exists as both ordinary and volatile at the same time, a thing so precariously linked to their identity that it simultaneously defines, keeps safe, and violently threatens their fundamental sense of self.

It is here that this border of the abject is demarcated, where the fetish object holds singular, unique power over its possessor and possessed.

Latham’s work would seem to seek to mediate this borderline for us, presenting these nylon windbreakers, vinyl records and restraining devices as neutral, displayed, arranged, collected, but also activated, worn, engaged, given life and identity and a sinister sense of hazard.

The ambiguous safety of these objects and their potential volatile nature is further complicated by the artist’s inclusion of self-portrait and self-history, a personal narrative that both renders vulnerable the artist himself, and attempts to pry at a sympathetic wound in his audience.

Latham therein sits enthroned, crowned with bull horns, garbed in royal emerald, flanked by the jewels and restraints of his station, surrounded by his court of sexually-charged anonymity, beings whose identity is obliterated by the very clothing and trappings that define them.

We, as viewers, find ourselves invited guests, invasive voyeurs, and sympathetic victims.

Far from lacking a sense of humour,  it is this laughing apocalypse of sorts that renders these works and their objects seemingly inert, safe,  and undoubtedly that much more dangerous.

If you are anywhere near Texas during that period I encourage you to check out the exhibition, as well as the other shows int he series, Latham’s new work is as remarkable and challenging as it is beautiful and disturbing.